I stumbled across Umbrella Prints a few weeks ago while taking a lazy tour through a bunch of new-to-me sewing blogs. Turns out I discovered the Australian company, which makes beautiful organic printed fabrics, just in time for their 2014 trimmings competition, which challenges artists, seamsters, and crafters of all types to make something awesome out of a packet of leftover bits of fabric. The competition is in its fifth year, and previous winners have included this bright pink fish puppet, a jaunty mask and crown, a gorgeous art book, a matching set of sewing accessories and stationery, and an entire collection of whimsical collages. 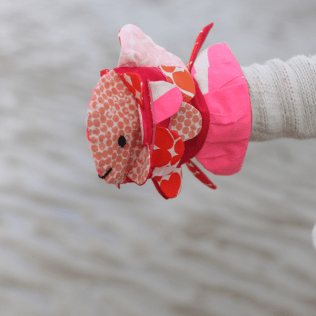 Fish puppet by Cate of Fabri’cate, winner of the 2013 Umbrella Prints Trimmings Competition 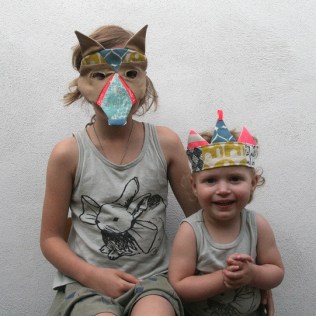 Mask and crown by Monica Hajek, 2012 winner of the Umbrella Prints Trimmings Competition 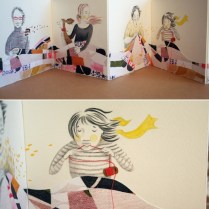 Concertina Book by Alisa Coburn of Ink Caravan, 2012 winner of the “most popular award” in the Umbrella Prints Trimmings Competition 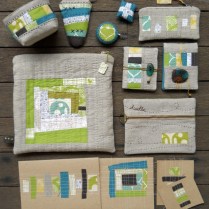 Sewing kit and stationery by Nova of A Cuppa and a Catch Up, winner of the 2011 Umbrella Prints Trimmings Competition 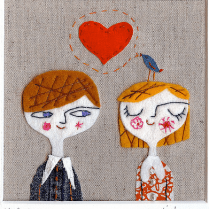 This year’s competition is already underway, with entries due on May 30. Six different packets are available on Etsy or directly from the Umbrella Prints shop. And they’re beautiful: 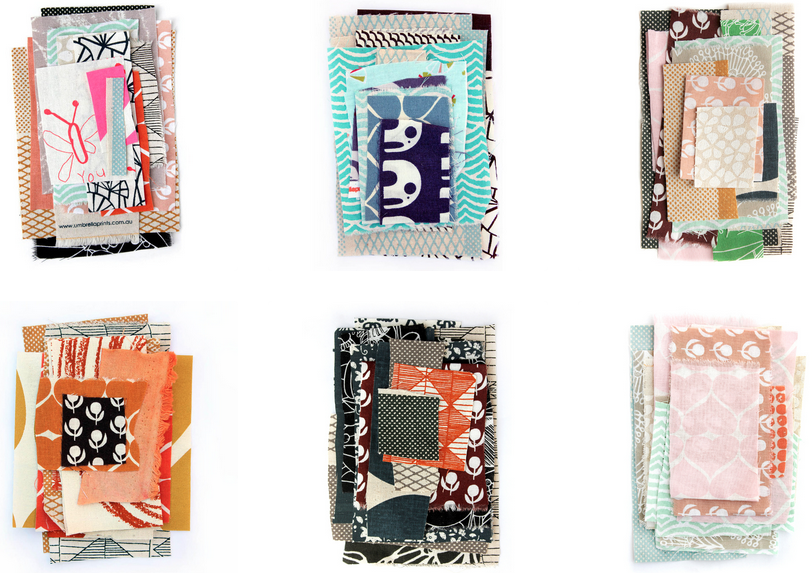 I ended up going with the “Earth” packet on the bottom left, a set of bright reds and yellows and oranges that I am so excited to work with. Now I just have to wait for it to ship from Australia….

(Want to play along? Full rules and information are here.)

At the beginning of the year I decided to stop buying clothes.* I’ve given in to the flurry of “30% off today only!” and “[obscure holiday] weekend sale!” emails from way too many retailers, and my closet is full of clothes I bought because they were seemingly affordable, not because I actually liked or needed them. (Pro tip: if you never wear it, that sweater you found for 60% off was not actually a good deal.)

A month or so ago I signed up for Unroll.me to hide all of those emails, which has gone a surprisingly long way in cutting down on my unnecessary shopping. I also started sewing (um…in case you hadn’t noticed), which has opened up a pretty sweet world of custom-made clothing.

My first attempt dress making felt like I had conjured magic out of thin air. That’s not to say the end result was perfect—if you look closely at the neckline or the sleeve hems, you can see how I accidentally stretched the fabric out when I was pressing it, so everything is a little bit crooked. And the color is…vibrant? I’m proud of it (I MADE A DRESS), but I haven’t yet mustered up the courage to wear it to work (some day! soon. I promise).

I’m not ready to give up, though. I’ve been wandering around the blogosphere, stumbling upon patterns that make me want to permanently abandon buying new clothes in favor of sewing everything myself (dresses? obviously. but also workout clothes and a bright yellow hoodie and fancy tailored shirts!). Behold the amazingness: 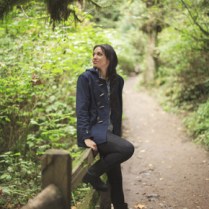 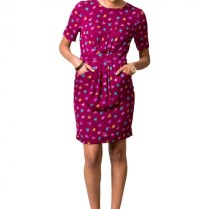 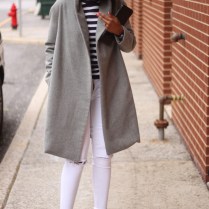 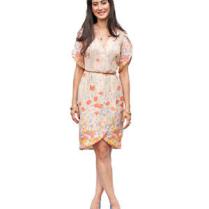 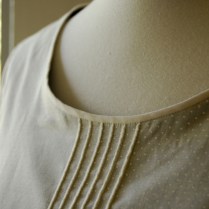 Sorbetto Top. Pattern from Colette Patterns, modified and sewn by Lizz of A Good Wardrobe. 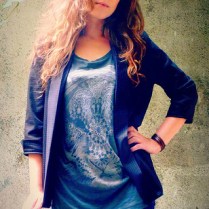 Victoria Blazer. Pattern from By Hand London, sewn by Leila of Where the Orchids Grow.

*Err…mostly. This year has a few obvious exceptions (exhibit A: a wedding dress, which I feel neither confident nor qualified enough to attempt), but the gist is to only buy the things I need, as opposed to the things I think I want when I’m bored.

In between singeing my taste buds off and watching a ton of Ugly Betty (how did I miss this show when it aired?), I put in a few more hours on my Quilts for Kids quilt this weekend.

Last weekend I pieced the four patch blocks and started sewing them into rows, alternating with solid blocks of this fun pink and orange scooter print. This weekend I finished the rows, sewed them together, added borders, made my first “quilt sandwich,” and (!) actually quilted something. Ta-da! 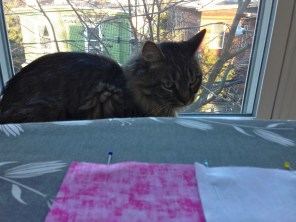 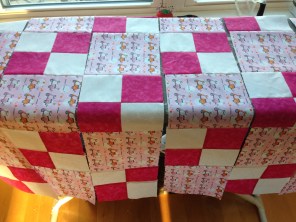 My “design wall,” aka my ironing board 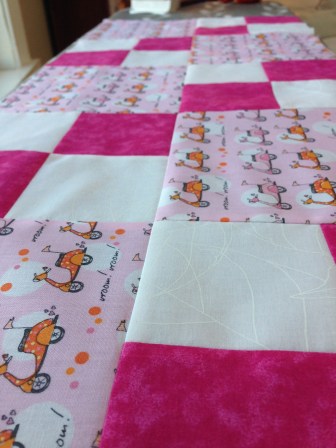 I think pressing seams might be one of my favorite hobbies. 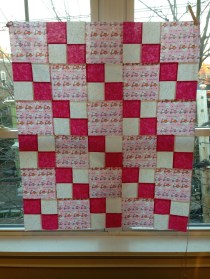 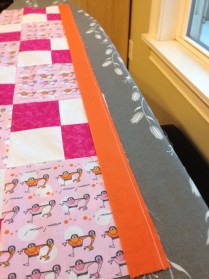 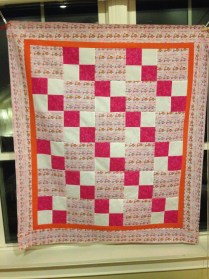 With borders! And lacking in sunshine…I may have gotten distracted during the border adding process. 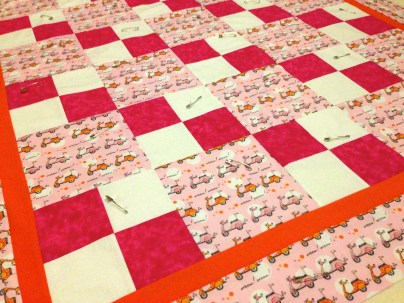 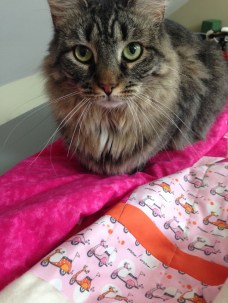 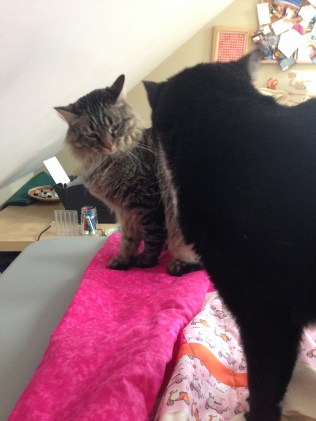 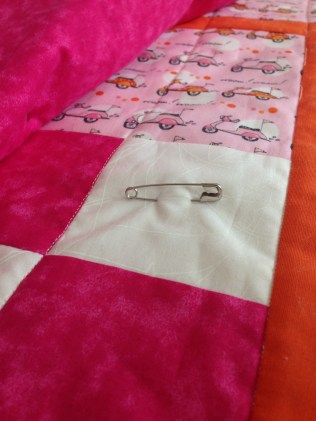 Stitching in the ditch: surprisingly difficult 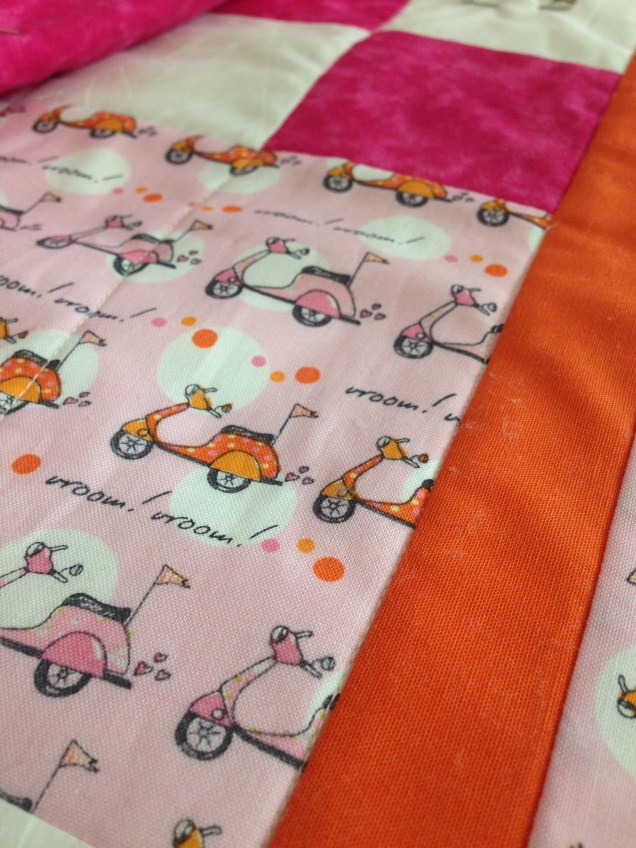 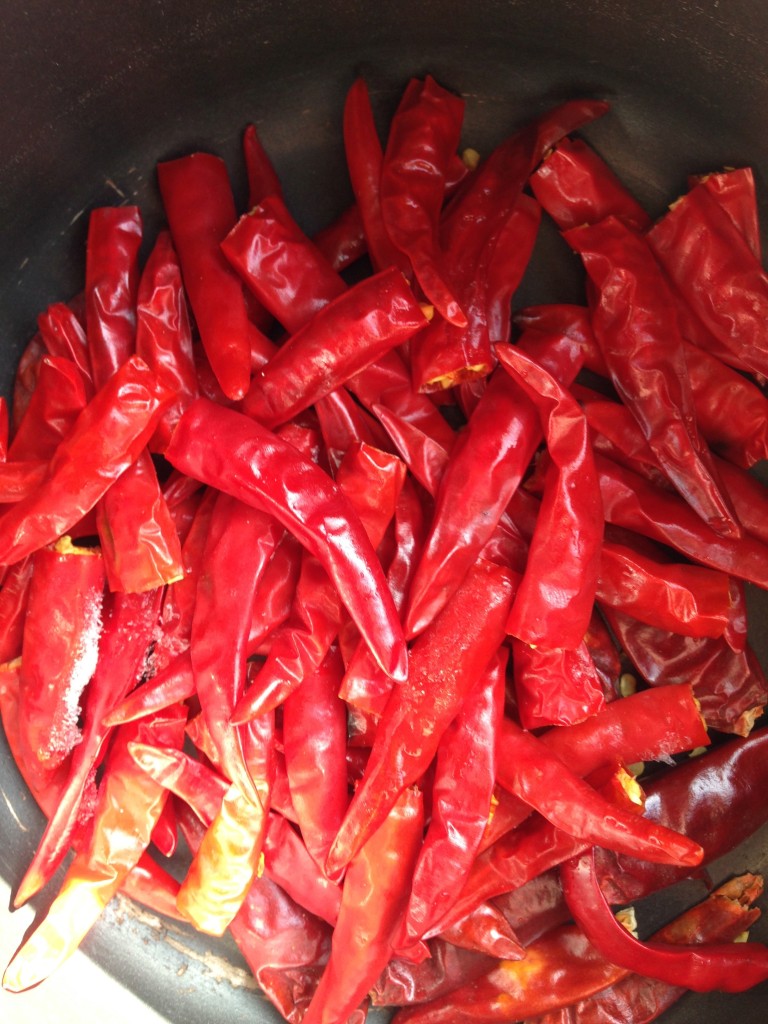 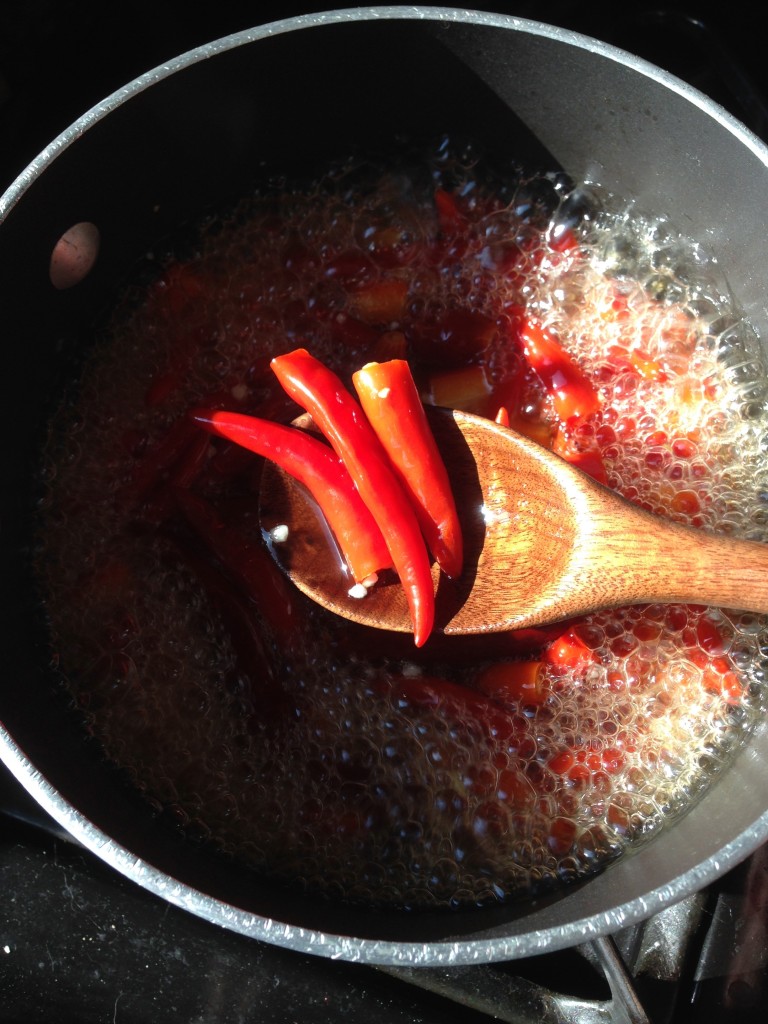 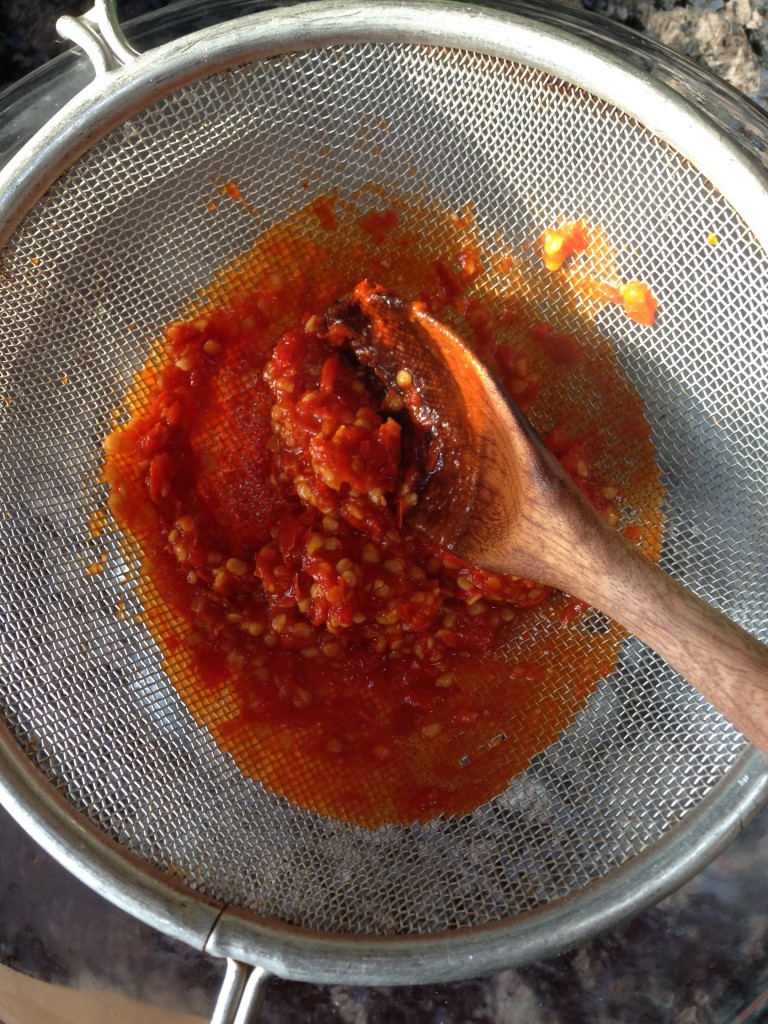 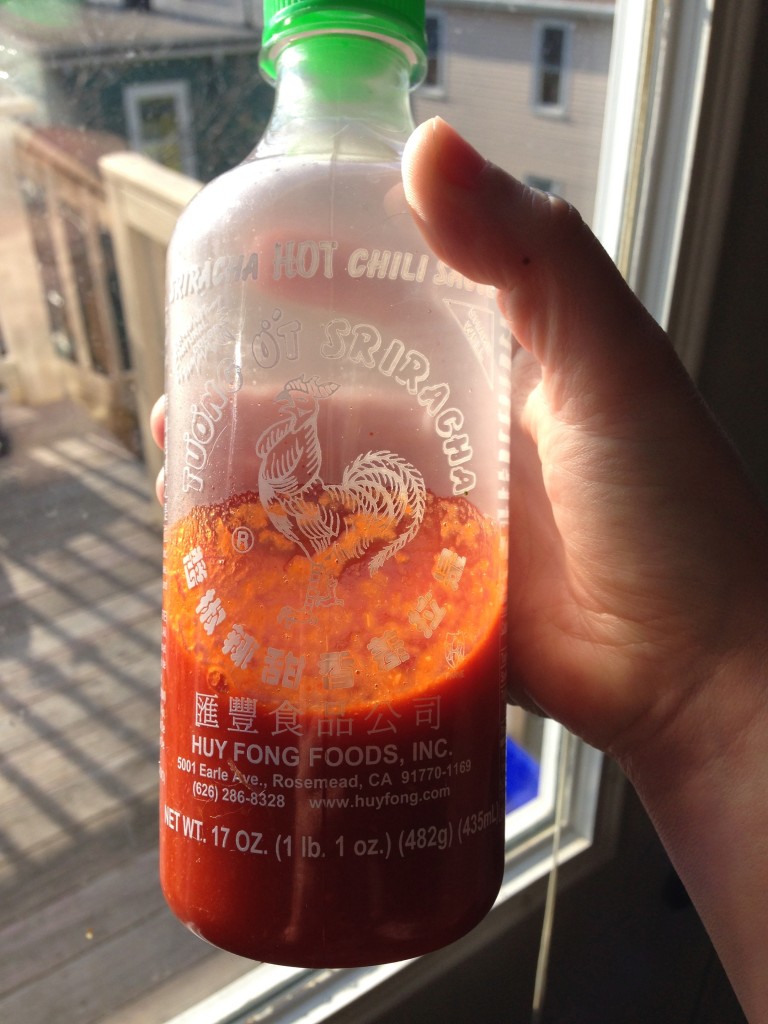 Verging considerably from the seamster angle this blog has been taking (if you’re only here for the quilts, feel free to ignore): I made my first-ever pull request (and had my commits successfully merged) on GitHub today! Voilà.